Ben Ballantyne of the Perth office says that the market in Perthshire is still governed by supply outstripping demand: “Overall I would describe the market as still patchy, with good quality properties in popular locations going to closing dates and selling well but in the main sellers are finding that the home report valuation is the ceiling price that buyers will pay.”

While there are some benefits filtering out from the more buoyant Edinburgh market, with buyers moving from the city having more to spend on country properties, on the whole the pace of the Perthshire market is sedate. “It is a good time to buy here, there is plenty of choice so it is very much a buyers’ market.”

The additional LBTT levy on second homes, brought in on 1 April this year has also had an effect but Ben Ballantyne believes it will be a temporary one. “We saw most of the sales activity in second homes in the first three months of the year to beat the introduction of the additional tax, since when there has been a bit of a lull, but I expect it to get back to normal later this year or certainly by next year.

“The extra cost is unlikely to stop people who want to own a holiday home in Perthshire or the Highlands”.

The Perth office of Ballantynes is currently marketing an unusual riverside property just outside the city. 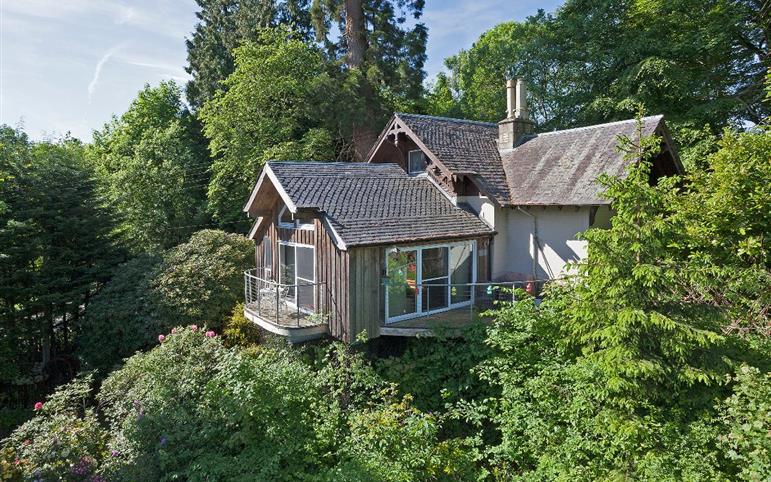 River Bank Cottage, Almonbank, the house was originally built as a small fishing lodge for a large estate but has since been extended to create a two- bedroomed holiday cottage.

At the front it is entered at ground level but the current owner has added an extension - on stilts - at the back of the house to give some stunning elevated views down to the water.

The additional room takes the form of a dining kitchen and living area which is open plan to the existing sitting room. Glass doors lead out on to the two balconies for the best of the views.

The house has trout fishing rights on the river and nearly an acre of mature grounds which gives a real sense of seclusion.

Carole Cameron, of the Perth office says: “It is a unique property and ideal for someone wanting a weekend retreat.

“River Lodge isn’t huge, but it would make a perfect bolthole for someone who wanted to get away to spend a few days on the river.

“It would also probably rent very well on the holiday let market as it is such a quirky property.”